Maria and I are trying to work out what might have happened.

Perhaps it was a husband and wife and it went something like this:
‘I’m sure I saw the couch on the truck before we left.’
‘It WAS on the truck – we carried it out together, don’t you remember?’
‘But did you strap it down?’
‘I thought YOU were going to strap it down.’
‘Well, it’s not on the truck now.’
‘Then where in hell is it!’

We have been driving along for about an hour on a blissfully sunny morning (finally) in Iowa – when I see something ahead that doesn’t look right.

Maria just manages to avoid it – by swerving to the left, with nothing coming up behind us, thankfully. We are so stunned it’s not till  much later that we ask each other,  ‘Should we have phoned someone about it?’

There is little else of incident to report about my final Thursday in the US – just 14 hours on the road, followed by an overnight in a dog- friendly hotel; then another day of bright sunshine with a final 8 hour’s drive back to Bill’s house in Relay, near Baltimore.

He won’t be back till late so we let ourselves in and order Chinese food, while congratulating ourselves on surviving the thousand mile trip without incident – apart from the near-miss couch moment.

The food arrives and we put on a couple of episodes of Seinfeld to watch while we eat.  Slumping onto Bill’s sofas, (correctly positioned in his living room rather than on an interstate highway), Maria and I now become a pair of couch potatoes.

Next day, Saturday, is my final performance of the tour.  In Washington DC, it takes place at St. Stephen’s Church near Columbia Heights.  No word back from the President yet in response to our invitation.  I jest, of course.  Though the Obamas live near the CCW office and I did in fact suggest we should invite them.

‘Well, I guess you could go and hand a flyer to the guys guarding their house and ask them to take it inside.’

The church is an attractive but huge cavern of a space – and therefore incredibly echoey.  But a lapel mic will be provided for me which should help.  Only nobody can find it.

Keith Dorset, who helps us get the sound up and running, looks in every drawer in the vestry and elsewhere in the church, but there’s no sign of it – it would seem the last people to use it may have walked off with it.

Sean at the church helps move the altar then rearranges the seating into semi-circles, while I start to practice articulating like crazy and trying not to speak too fast.

Maria is really keen to run sound cues for the second time running – and hopes to improve on the 99.5% rating I gave her after Wednesday’s performance.  Once again, Cara is not brought to the venue – the echoes, if she barked, would take minutes to die away in this space.

Unluckily, there are big delays all day on the Metro due to track works, which won’t help our audience – so we decide to hold back the start to allow extra time for folk to get here.

About 50 or so turn up in the end, which Maria assures me is a healthy turnout for such a busy city with so much else going on.  There are numerous friends and supporters in though, which makes the atmosphere feel special.

What the audience see

But someone walks in very late and very obtrusively while I’m enacting Clifford Allen’s impassioned speech in 1916 to two thousand COs.  Bill tries asking the latecomer to leave, but he won’t – calling out, quite distinctly:  ‘Lemme listen, man – I’m a sinner!’

I stop in mid-flow for a moment to see whether he’s going to continue – but he now sits down and seems absorbed by what he’s hearing.  It flashes through my mind that maybe he thought he’d walked into some kind of revivalist meeting.  Certainly Allen’s speech is intensely compelling.

Dee, who is on security, knows the man however.  Apparently he’s  been barred from the church more than once – and has been drinking.  And so, a little later on, the self-confessed sinner is escorted from the church – all this happening while I continue with the play.

The performance proceeds to its conclusion – the exquisitely haunting ‘last post’ lament, sung by Helen Chadwick, reverberating around the Sanctuary – and then it’s over:  my 17 performances Stateside of ‘This Evil Thing’.

At the start of the Q and A, Maria, in tears, thanks me on behalf of CCW and presents me with a framed letter, ‘We Won’t Kill,’ which had been written to the New York Times in the 80s by a CO – who happens to be in the audience tonight.

I don’t think it’ll hit me till next week.  That it’s all over.  As the tour progressed the days seemed to fly by ever more quickly.  And now it’s time to pack up my props and squeeze the one crate I brought over with me into my suitcase again – for the uncertain journey through customs back to the UK.

I have learnt so much while in the States these six weeks.  I have felt how ‘live’ the subject of conscientious objection still is over here.   I have dined with Vietnam War-era COs, and supped with war-tax resisters, some of whom have been imprisoned for their protest.

And I’ve heard, not only in books, but from one of the schoolteachers we met, how the US military was far more brutal to their WW1 COs, (which included the teacher’s grandfather) and in a  more institutionalised way, than the British ever were.  (Not that that lets the British Army off the hook, of course.)

I’ve also discovered that all men in the US are expected by law to ‘register’ at the age of 18, and that failure to do so can incur significant penalties.  There is (currently) no draft, but there is ‘registration’ – and the only way you can register a conscientious objection is by writing that fact in the margin, down the side of the form.

But I’ve also discovered the truth of  ‘good ol’ American’ hospitality – staying with so many wonderfully generous hosts.  I have eaten shoofly pie and whoopie pie, and best of all, I have tasted bumbleberry pie.

I have waited at traffic lights while Amish horse and buggies trotted past, and I have endured the Ohio Turnpike (which, in case I forgot to mention it, is long, flat, dull and long) five times without quite ever dying of boredom.

The Amish prefer not to be photographed from the front

Mercifully, however, I didn’t experience a tornado, get chased by a lion or career into a couch at 50 miles an hour.

I’ve seen so much and yet so little.  This is a huge country and there are a ‘whole bunch’ of states out there we didn’t get anywhere near.

Maybe I’ll come back.  I would very much like to come back.

And so I give my heartfelt thanks to Maria, Bill and Jake for putting this ambitious project together – and for all their great passion and enthusiasm for it – and to Peter Goldberger for making the connection between us in the first place, after he saw the play in Edinburgh two years ago.

Then on Sunday, Bill takes me to have a farewell drink at the new brewery/taproom that has opened near his home – and guess what?  It’s owned by Guinness.

As I take a long cool sip of the black stuff I ask myself, what next?  What next for me as an actor and playwright, of course. But more intriguingly, in the light of all the thought-provoking encounters I’ve had here, what next for me as a peace activist?  Something other than Guinness is  brewing…brewing in my mind…seeds, ideas, possibilities…

Next day, I have a final session of sightseeing – visiting the sobering and inspiring Museum of African-American History and Culture – depicting a powerfully moving journey from the beginnings of the slave-trade all the way through to President Obama’s inauguration.

And then it’s off to the airport.

As the plane begins to taxi towards take-off, I find myself recalling all the special people I’ve been amongst since I’ve been here, and that’s when it hits me, with a pang – the plane beginning to lift from the ground, my eyes filling with moisture. 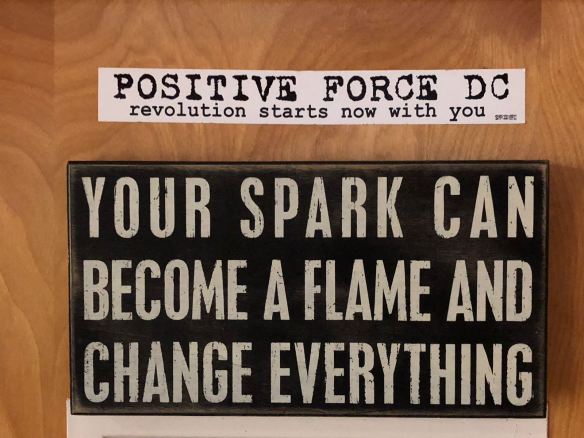 3 thoughts on “Couch potatoes – and a glass of Guinness”