Should I stop the play?’ I ask myself.

A small child is crying right down near the front, and as the characters in the play get ever more impassioned, so the child is getting ever more upset.

Did the message not get through? I suggested to all venues that the play with its serious and strong themes is really only suitable for 14 and upwards. I saw the father bringing the child in at the start, along with its not much older siblings and thought, oh dear, this could be tricky.

I am at Iowa Mennonite School in Kalona. The school hall is easily the largest space I’ve played in the US, seating around 600, but on a very chilly Sunday evening in mid-April we’re hoping for maybe 100 in the audience.

I do stop the play (as I have done on occasion in the past) and gently inquire whether the father would like to take the child out – pointing out there are some even stronger sections of the drama to come.

My concern of course is not for myself – we actors are used to performing through all kinds of distractions. (I once rehearsed a previous solo play of mine for two weeks with building works going on every day in the very next room.)

It’s the child I’m concerned about – who does seem distressed – and the rest of the audience who must be distracted by it. So the father takes the opportunity offered to leave and I start again from where I’d left off.

We have about 130 in and once again there are numerous COs present. Marcus, the technical director, tells Maria afterwards how his grandfather was a CO in WW1 at the notorious Fort Leavenworth – where COs were persecuted and tortured. It’s one thing reading these stories in books – but to hear someone telling you how it happened to their grandfather really brings it home.

We have the good fortune to be staying here with Shirley and Daniel in their spacious home in the middle of nowhere – well, that’s how it seems to me. Wide open vistas with very little sign of other folk. 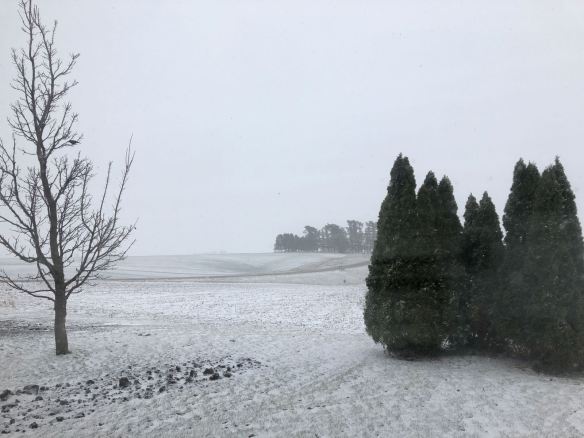 They are the most generous of hosts, and all kinds of delicious food is offered to us during our three days here. On our first morning, they come down the stairs into the very light basement apartment they have given over to us, each clutching a freshly-blended fruit smoothie.

This is also the most devout home I have stayed in on the tour – they are Mennonites in their late seventies, and on every mug and on every wall there are quotes from the Bible and uplifting spiritual messages. Even the impressive old grandfather clock, (made by Daniel’s father when he was only 18), gives one a timely reminder on its clockface. 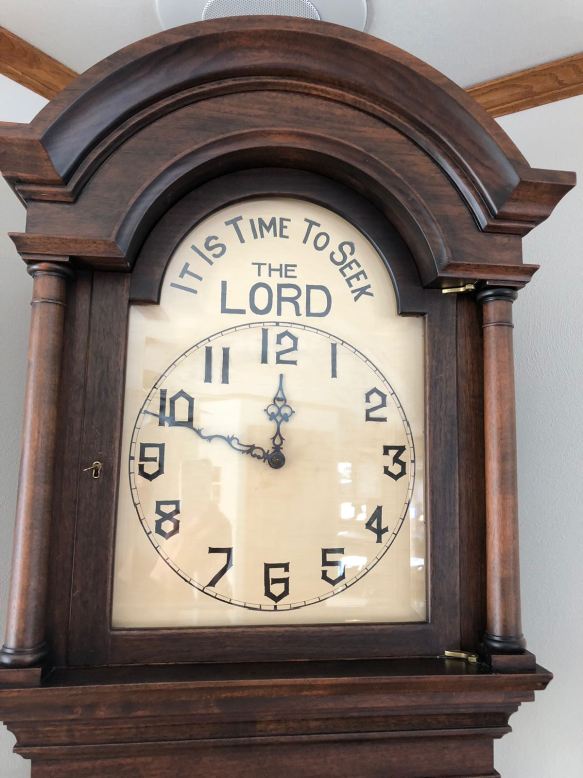 We are in Amish country once more, the roads in the nearby small town of Kalona filled with horse and buggies – as well as road-signs alerting drivers to that fact. (The other extreme from the road-signs in Yorkshire in February, which warned us of tanks emerging onto the road.) 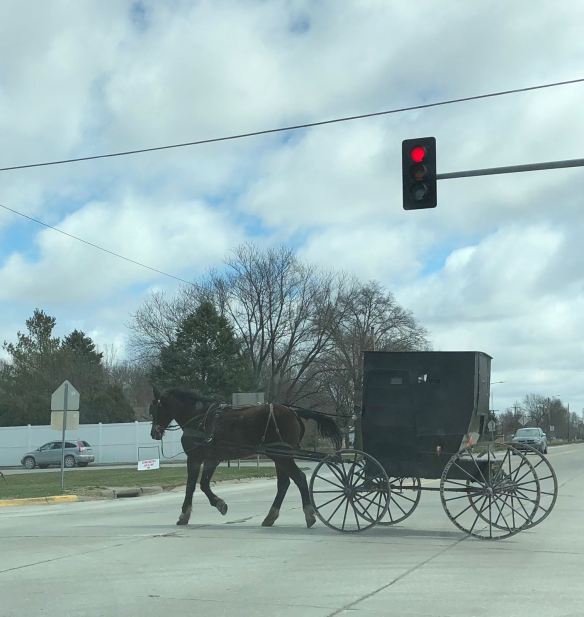 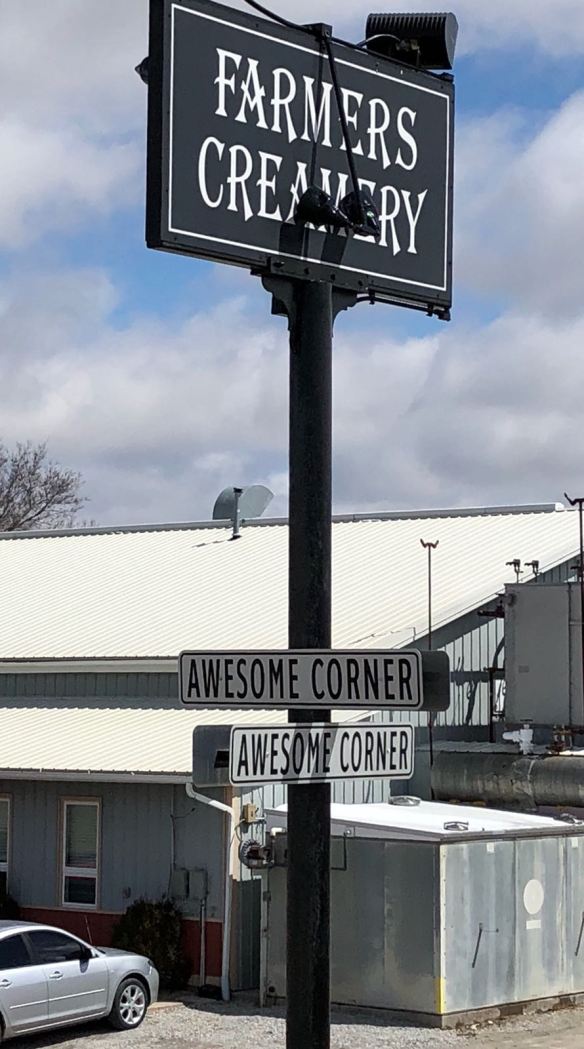 The morning after the performance, Maria and I go into town to visit the Mennonite Historical Museum, which has some beautiful old pieces of furniture, then we head to the Golden Delight Amish bakery to pick up some dessert to follow supper. We set our hearts on the bumbleberry pie – apple, rhubarb and raspberry. It sounds scrumptious – but Maria is a vegan and asks what ingredients are in it.

The young Amish woman lists them, and my heart sinks when I hear her say that it contains ‘bacon powder’. Oh well, guess we’ll have to find something else then. Maria doesn’t seem bothered, however, saying to the assistant, ‘That’s great, we’ll take it.’

I hadn’t been joking – that’s what I thought I heard, knowing it would be a ‘dealbreaker’. What a relief.

Tuesday morning after breakfast, Shirley embraces us both and pats Cara on her snout before offering up a prayer for the rest of our tour – after which we journey on for three hours to our furthest destination west – Lamoni, in southern Iowa. 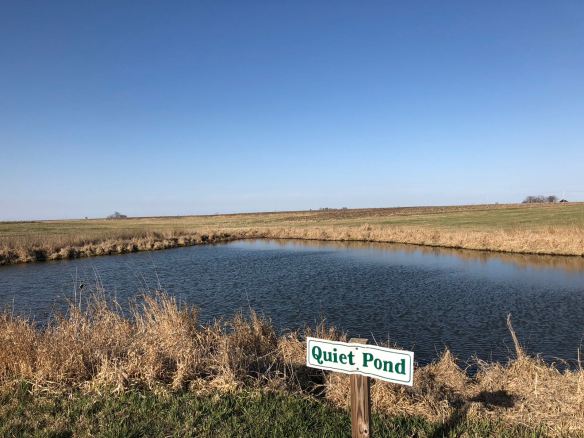 It’s a lovely sunny evening when we arrive, warm and spring-like, and I take myself off for a short hike on a nearby trail where there are numerous ponds – as well as encouraging messages on signposts urging the locals to stay fit and watch their weight. 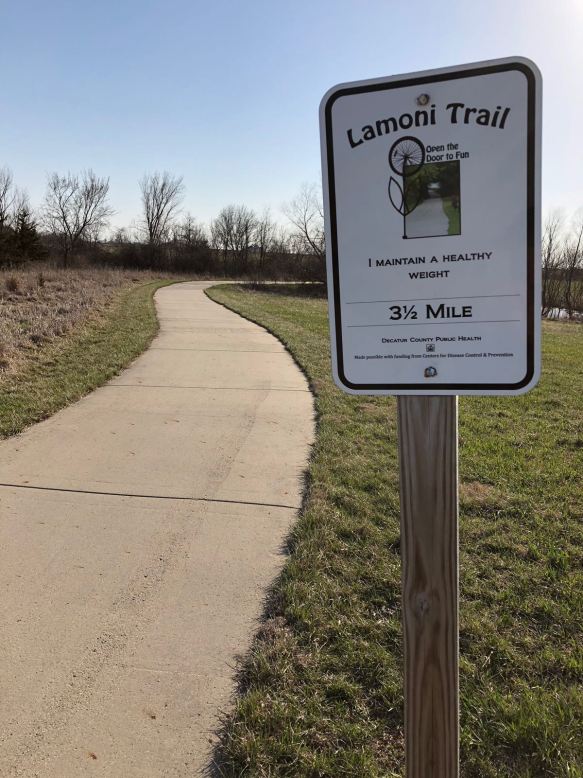 No problem with my weight while doing this play

Breaking the evening stillness, I hear a siren starting up in town. I don’t know what it’s for but it sounds worrying. I’m a little way from our B and B, and when I get back I ask what it was.

‘Oh, that was a tornado warning,’ Cliff the proprietor tells me.
‘Really?’
‘But it was just a test. They test it three times a day, not sure why – we don’t really get tornados round here.’
He pauses.
‘Guess there’s always a first time though.’

He then asks, ‘Where were you when you heard it?’  I tell him I was on the trail. ‘Hmm. If you’d been out later towards sunset that might have been a little risky.’
‘How so?’ I ask.
‘There’s a mountain lion out there somewhere. Apparently she’s big – about to give birth by the look of her, someone said.’

That would have shaken me up, I think to myself – running into a lion.

Tornados, lions; well it’s a bit different from life in Clapham Junction. I’m glad to reach the cosy safety of my room – which is named ‘Shalom’.

Next day we meet Matt Frizzell, our host at our venue, Graceland University (nothing to do with Elvis, I hasten to add).

Matt is a delightful man who teaches theology and ethics here. He explains how the university, established in 1895, is affiliated to his church, the Community of Christ. Though an off-shoot of the Mormons originally, Matt makes it clear that the Community have no connection now to the Mormons. He also points out the chilling fact that back then in the 19th century, just four miles away over the state line in Missouri, a person could shoot Mormons with impunity.

We join Matt’s class on the work of Martin Luther King Jnr., and Maria and I talk to the students about conscientious objection, and I perform a few extracts from the play. Matt relates this to King’s work, and we all debate the differences between non-resistance, non-violent resistance and violent resistance – be it to oppression, segregation, military conscription or anything else.

Some of the students join the audience that evening for the performance in a beautiful 100-seat space. But it seems my technical requests haven’t been received – specifying that I would need someone to operate sound.

Valiantly, Maria steps up and offers to do it. Like her colleague Bill, having seen the play a number of times she is at an advantage in knowing what’s coming next.

I give her a quick ‘induction’ and she is flawless – but I’m glad she chooses to leave Cara at the B and B rather than have her with her in the sound booth. The cues that involve gun fire and explosions would have certainly been augmented by the hearty barking of a 21st century dog.

Next morning we pack the car and begin the incredibly long 16 hour drive back east – over a thousand miles.

Leaving the threat of tornados and lions behind us, we are headed towards D.C., Donald Trump and all the president’s men.