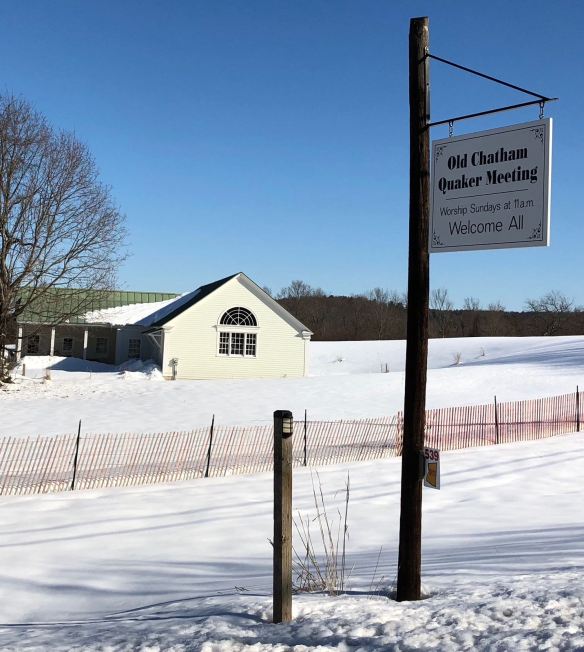 The venue for Sunday afternoon’s performance.

After eggs and hash browns, my host Joseph takes me to the Meeting House, a few minutes drive away – where we have an hour or so to get the sound checked and set-up before we make way for the 11am Quaker Meeting for Worship. Only we don’t get it set up. Connectivity and compatibility issues again. Absence of an important cable.  Absence of anyone who can help us out.

We know we still have 90 minutes after Meeting before the scheduled early afternoon performance but I am concerned.

We take our places in Meeting and spend a calming hour in near silence.  I can’t help running through the play in my head – but am also entranced by the sparkling light pouring in through the large windows of this recently built Meeting House – all beautiful wood and beams.

Afterwards,  Joseph makes calls. Various people leave home and get in their cars to come to the rescue.  And finally it gets sorted – phew.  But there is still the same issue as last week of missing voices and phone rings. 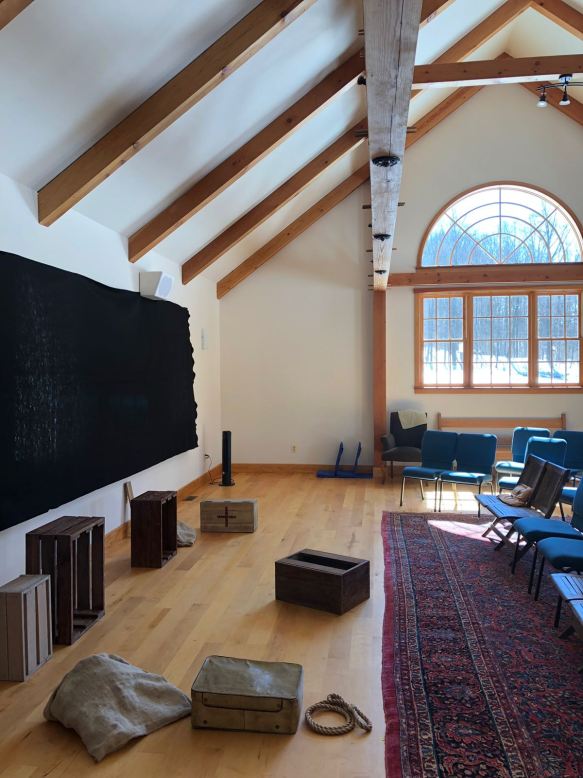 The audience are going to be very close!

Audience begin to arrive, it’s not a large room, and maybe 50 or 60 are packed in – Bob Elmendorf who has helped organise today’s event is introduced to me.
‘Don’t shake my hand!’ he insists.
(What did I do wrong?  I think to myself.)
He beams a smile.  ‘I’ve been sick.  I really don’t want to risk giving you what I’ve had.’

Joseph operates the cues perfectly but people wonder where the sound of the telephone comes from. The intimacy of the space makes for an intense performance.  Bob Elmendorf enthuses about the play and its subject matter – and I am chuffed that he made the effort to be here, having been so sick recently.  At the Q and A there are COs who stand up and speak – and some war-tax resisters too.

It’s only 4pm, three hours of daylight still – and back at our hosts’ house, I tell Phoenix it’s been a great day so far but that I’m feeling a little overwhelmed by all I’m experiencing.
‘I can tell.  Why don’t you go and take some time for yourself outside,’ she suggests. ‘There’s a chair under that oak tree next to the pond. Take this blanket and cushions and just chill.’

That chair has my name on it.

Chill?  It’s freezing! And yet I do have the blanket, and the afternoon sun feels warm on my face, and the chair by the pond, which is now thawing under the sun’s rays, is the most idyllic spot I’ve sat in to unwind in a long, long time.  The native birdsong is enchanting and different to anything I’ve heard back home.  I drift in and out of consciousness. It’s heaven.

I go in refreshed and at 7pm Joseph serves up supper.  Two other friends of theirs arrive, who saw the play, and while tucking into a delicious meal we learn a great deal about each other.  One person at the table lives in an ‘Intentional Quaker Community’ which I am very curious to hear more about.

And I discover that two people at the table have served prison sentences, and not short ones, for withholding tax in protest at the obscene amounts of military spending in the US. One of them has also had his license to practice his profession revoked for three years, and being ‘on probation’, is also under travel restrictions.
‘If I want to go to New York City for example, I have to get permission’.

I am staggered.  Bertrand Russell, one of the heroes of my play, was stripped of his lectureship at Cambridge University, and had a travel ban slapped on him, losing his passport so that he couldn’t lecture in the US, and being unable to speak publicly in certain places in the UK.  All because of an article he wrote about the mistreatment of a CO, and for public speeches urging peace negotiations to bring the war’s carnage to an immediate end.

100 years later, I am having supper with people who are equally willing to take risks with their careers and livelihoods for the sake of deeply held pacifist beliefs.

And myself?  Well, here am I, touring this play – an intensely thought-provoking 80 minutes, many people have told me.

But I go to bed that night, stars twinkling outside the window, moonlight caressing the snow-white fields, asking myself, what am I actually risking? To provoke thought and debate has its worth, of course.

But what am I doing that comes anywhere near the quiet bravery of the people I’ve met in the States these last 10 days?

1 thought on “‘Would it be alright for me to go to New York, please?’”