Ros Hutt, the director of THIS EVIL THING, and myself were hoping to get up to Richmond Castle in Yorkshire to visit the very cells where Bert Brocklesby and other conscientious objectors were imprisoned in 1916.

There is still graffiti on the walls of one cell, drawn by Bert himself with a piece of charcoal he smuggled in – that graffiti being a rather fine drawing of his fiancee Annie Wainwright; as well as an image of a man bearing the weight of a cross.  (The graffiti is being restored and preserved by English Heritage.) Timetables wouldn’t permit our trip however.

So I’m very glad that I did manage to make another trip earlier this year – to Conisborough, the south Yorkshire town 9 miles from Sheffield where the Brocklesbys lived. Bert was  organist and choirmaster at the local Methodist chapel as well as a lay preacher, and I wanted to see the chapel for myself, particularly as Bert gave a very controversial sermon there in 1915, speaking out against the war, and turning many members of the congregation against him. One man challenged Bert asking why he hadn’t joined up yet. When Bert mentioned that war was against the Commandments, the man replied, ‘Oh bugger the Commandments!’ 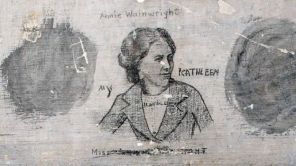 The sermon features in my play. (As does Bert drawing Annie’s picture in his Richmond cell.) So it was exciting to locate the family home, or certainly the small street it was situated in, and then to make the walk myself from there up a steep hill to the road the chapel was in, just as Bert would have done on the evening he delivered his sermon, which he knew would be a bit of a ‘bombshell’.

The chapel is still there – but alas, is now up for sale – and with access forbidden. But it was easy to imagine the controversy taking place outside it after Bert’s sermon.

Tickets for THIS EVIL THING now on sale here.