Well my insect bites have finally gone down!

One week ago I had a brilliant photographic session with the wonderful  Simon Richardson at his house outside Bedford.  We were trying to get some good images for the play I’ve written and will be performing in Edinburgh this August – THIS EVIL THING – the compelling and inspiring story of the young British men who in 1916 said no to war.

One conscientious objector in 1917, James Brightmore, had been imprisoned by the Army in a ten feet deep pit, as no cell was available at the time.  Simon didn’t have a pit in his garden (we could have dug one, I suppose) but he did know of a nearby well that had been cleaned up and might prove to be a good approximation.

It actually had steps going down into it so in fact it wasn’t going to prove a health and safety nightmare.  This is one of the photos that Simon took there. 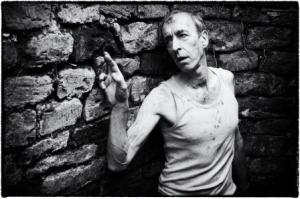 Ah, the insect bites…well, a number of WW1 C.O.s were subjected by the Army to one of their most grisly punishments – Field Punishment Number One – more commonly known as ‘crucifixion’ – involving having your outstretched arms strapped to a beam , or fence (sometimes with barbed wire on it),  your feet also being strapped together, and then being left there for two hours – this could be inflicted for up to 28 days.

Simon said there was a boathouse in the neighbouring grounds which had a perfect cross-beam for being strapped to.  So I took off shoes and socks and we made our way – through stinging nettles and grasses infested  with insects to the boathouse – where Simon duly strapped me up and I spent 15 uncomfortable minutes being photographed – and bitten – by said insects.  Worth it though – he got some great shots.  Of course, 15 minutes is nothing compared to two hours – and it was a friendly photographer doing the strapping up not a vindictive army sergeant – but nevertheless, my shoulders ached, it was hot and sticky, and I got a taste of what the actual punishment must have been like. 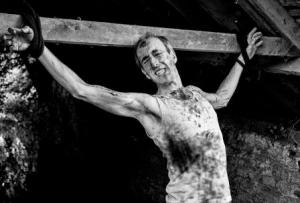 Far more civilised was being in Simon’s studio, attempting to channel Bertrand Russell – eminent philosopher, mathematician and pacifist who devoted himself throughout the First World War to the cause of the C.O.s.  I don’t look like Russell, but I could feel something of his marvellous intellectual energy coursing through me as I took up pen and puffed on pipe. 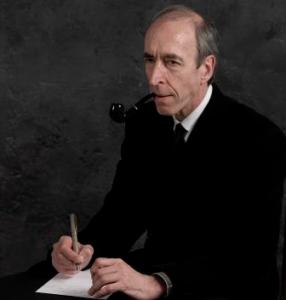 Tickets for THIS EVIL THING now on sale here.