Saint Augustine’s church, Haringey, is not easy to find – up a small side street off the ever-busy Green Lanes. Along with the house next door, it is home to the London Catholic Worker, who offer it as a house of hospitality alongside their many other charitable activities – especially their work with destitute and homeless refugees.

Haringey First World War Peace Forum wanted to host my play as part of their series of events remembering conscientious objection in WW1 and suggested that I perform it at the church – on a chilly night in February.  I was more than happy to – but learning that the event would be free and that it would not even be necessary to book a ticket, I wondered (as I have done before) whether anyone would bother to turn up. When events are free, people often feel no sense of commitment to attending. And those that do venture out –  would they even find the church?

I hadn’t realised, until I met the Haringey group, that there had been 350 COs from Haringey in WW1 – an impressive number. And you could add me to that figure to make it 351 – as I spent the first 18 years of my life a short distance away down Green Lanes – at Turnpike Lane (‘lane’ gives totally the wrong impression in each case – countryside is nowhere to be seen).

That’s where my dad, who fought in WW2, lived from 1955 to his death in 1994. That’s where I grew up and went to school, and where – a short distance away from here – I went to church as a Catholic lad, at St. John Vianney’s in West Green Road.

Most importantly that’s where I got the acting bug, getting involved in all the drama productions at Wood Green Comprehensive, then as a teenager catching the bus each Friday evening to travel to Enfield Youth Theatre to nourish even more my ever-growing infatuation with the stage.

So on Feb 22nd of this year I was in fact, as it only truly struck me towards the end of the performance, playing on ‘home turf’ – the first time I had ever performed professionally in my home borough: the borough that all those years ago was good enough to give me (as they did in those days) a discretionary grant to go to drama school. I understand now just how fortunate I was.

I would have loved it if my dad had been alive and able to make the short bus journey to come and see me give ‘This Evil Thing’ in St. Augustine’s.

But there were as it happens, 150 or so who DID make the journey, piling in and packing the pews the other Thursday night. 150! What a turnout, and a buzz of anticipation in the air. Bright overhead lights, no stage lighting of any sort, but Becky Osorio back to operate sound for me brilliantly (as she had done a few times on the autumn tour.)

And the church itself – well, it’s like the Olivier Theatre of north London – with its curving, raked, amphitheatre-like pews. Smaller though. And much easier to play than the Olivier. 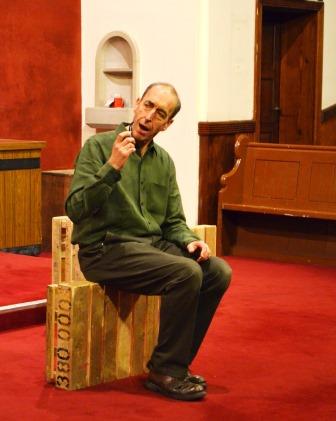 Afterwards the audience happily munches on humus and other snacks while engaging in a lively Q and A – and then a request for donations is made to help with the church’s work. Possibly because the event itself was free, people are incredibly generous and many tenners and twenties are tossed into baskets – easily covering any costs and most importantly enabling the London Catholic Worker to be given a very helpful contribution to their work.

Then it’s onwards, from my home turf to…Broadway – at last! ‘This Evil Thing’ on Broadway. Well, to be more accurate…in Broadway – that lovely village in the Cotswolds – invited to play there by the Broadway Arts Festival.

The Beast from the East is beginning to chuck snow at the eastern side of the country – but fortunately I am heading west, and although there is a dusting of snow on the Cotswold hills, nothing so bad yet as will cause us to cancel the performance. Thankfully. I can’t bear it when performances are cancelled.

Karen (in charge of booking me) puts me up for the night in her and her husband Tom’s lovely home – but first, the show. Off to Lifford Hall in the village at 4pm, Tom and I, to meet Nick, who I am assured knows all about lighting and sound.

‘And you’re able to operate the sound for me tonight, I gather, Nick?’
‘Oh no, I ‘m not free tonight.’
‘Oh but I thought…’
‘I’ve got another engagement, sorry.’

And thus, Tom, retired GP, has to step forward with some trepidation to be shown the ropes (which are actually very straightforward.)

Nick then has trouble getting any sound other than something resembling muffled fog out of the speakers – until we discover that someone has pulled out two vital cables.

‘This is what happens, you see,’ he says laconically.

So, I show Tom the ropes, how to trigger the sound cues, he begins to feel confident about doing this, and then I turn to Nick again.

No, it seems. People start playing with switches and eventually six lights on a bar in front of the stage do come on.

Only problem is they are pointing all over the hall and anywhere but the stage.

‘Can we get them focused on the stage?’ I ask, without much hope, fearing I’ll have to do the play in the garish light of overhead fluorescents instead.

‘You need a ladder,’ says the laconic Nick.
‘Yeh, I reckon we do. And erm, does anyone have a ladder?’

A longish pause and then Nick walks up to the stage and off into the wings and comes back with a very large ladder and proceeds to climb up it to point the 6 lights at the stage.

As I said, we are in Broadway not on it.
But Nick has come to the rescue. ‘Thanks, Nick!’
‘Anything else?’ is his reply.
‘No, that’s great.’

And off he goes to whatever his other engagement is.

Later, I ask Karen about Nick’s background as a technician.

‘Oh he’s not a technician, he’s an apple grower,’ she informs me. ‘But he does know about sound.’

Well, at least we have a show now, and the Hall has a lovely feel and acoustic, plus we have six lights pointing brightly at the stage. Tom is at the ready, and despite the threatening weather, 100 people turn up and sit attentively with glasses of red wine while I unfurl the story of Britain’s WW1 COs.

In the Q and A an extremely charming and interested gentleman asks very pertinent questions while also commending the play and what it achieves. I chat more with him later on, and again he has some excellent questions, and listens to my responses with great warmth and interest.

Well, I’d never have guessed. He was certainly a very pacific-seeming ‘high-up-in-the-military.’

Next day I drive my white van back towards and into white snow flurries. And the final performance of my February mini-tour, at the Marylebone Theatre for the Regents University, IS in fact cancelled, as are all classes there.

I would normally, as I say, feel crushing disappointment. But somehow, knowing that the University can reschedule the play for later in the year – and having had nine such satisfying performances already this month, thanks to the coolest chaplain at Reading Uni and the warmly welcoming folk of North Yorks, from my home turf in Haringey to my first appearance professionally on or in any kind of Broadway – I don’t feel too crest-fallen. The snow is pretty heavy in London now and we might well have had a tiny or even empty house had we performed.

So I spend the evening at home instead – rehearsing. Not the play but my packing – involving two large suitcases – for the next

stage of my journey with This Evil Thing. Which in case you’re wondering will take me overseas no less.

All I’ll say for now is ‘watch this space!’

1 thought on “The Olivier Theatre of North London”