The answer to that question for about 40 people in and around the North Yorkshire village of West Burton seemed to be – ‘I know, let’s go and see a play in the local village hall about the treatment of COs in World War One.’

Perhaps that’s why there were only about 40 of them – it being Valentine’s Night – or maybe the bitter cold and rain had something to do with it. But I didn’t mind – those 40 were pretty keen and attentive. A number of couples there who had presumably come up with the answer above – and a few singletons too, who possibly not having a date for that night had decided – ‘Well, think I’ll go and see that play in the local village hall about the treatment of COs in World War One then.’

Thank you to them all for coming. I feel it’s a very concentrated and focussed performance. Colin operating sound and lights for the second night now, is already as razor-sharp on the cues as if he has been doing it for six months.

We have the Q and A, for which most of the 40 stay behind – and all week Nobby Dimon is facilitating it, taking questions from the floor, and making points himself, which is a great relief to me as I must confess that doing a one man Q and A after doing a marathon one man play is quite taxing. This two-man Q and A is a far more preferable way to end the evening.

Then everything is packed away – and afterwards I can’t help asking, ‘’And you know where you’ve put the special key, Nobby?’

Uh-oh. No. It’s not in his pocket. Or the other pocket. How about that pocket maybe? Nope.

Where can it be then? We all start searching the floor of the village hall, and Nobby suddenly has a thought – maybe when he moved the van closer to the entrance for the get-out, it could have been dropped then.

I go out into the bitter dark, shining my i-phone torch on the black tarmac, slowly walking towards where the van had been parked earlier. No. No. No sign of it – YES, there it is! Phew! Relief all round! The stage rostra CAN be assembled tomorrow after all.

When Nobby and I get back to Richmond, with my crates in the big van now as the side door is no longer frozen (well, the temperature has risen a whole two degrees after all) we indulge in what becomes a ritual for the week – elevenses – but at night – involving local Wensleydale cheese, Yorkshire fruit cake, some grapes or a pear, and a nice hot cuppa – along with much chat about theatrical life and all its trials and joys.

Next day, we’re going nowhere – because we’re actually playing in Richmond itself – not the tiny Georgian Theatre Royal (where I performed She Stoops To Conquer 35 years ago) but in the Town Hall – where my dressing room is the Mayor’s Parlour no less (sounds grand but it’s not THAT grand – and the walls are full of regimental army photos and the like – just to get me in the mood).

And above our stage (once we erect it ) is a low-hanging ornate chandelier. Very First World War army camp and parade ground. (Not.)  It can’t, of course, be removed. So I need to avoid crashing into it when I’m standing on the crates which I do quite a bit in the course of the play.

Before the get-in, though, I go to Richmond Castle which is right next door and Angela from English Heritage kindly takes me to a part of the Castle the general public are not currently able to visit – the cells. Specifically she takes me into my protagonist Bert Brocklesby’s cell where he spent three days in solitary confinement a number of times for refusing to obey orders when he was first sent to Richmond Barracks in 1916. In my play there are scenes set in this very cell – and it sends a shiver down the spine to realise I will be acting out those cell scenes on a stage a couple of hundred yard away from here in the Town Hall later that evening.

The cell is even smaller and dingier than I had imagined – and I wouldn’t want to spend three hours in there, let alone three days. But Bert was able to befriend Norman Gaudie, another CO, through a hole in the bottom of one of the walls, and play pocket chess with him. He was also able to draw on the wall with a piece of smuggled charcoal – and he drew some beautiful graffiti, still preserved today, including a drawing of his fiancée Annie – again an incident I depict in the play.

Bert’s drawing of Annie on the wall of his cell

Steve is the part-time caretaker at the Town Hall and he tells us that he spent 20 years in the military. Hmm. I’ll be interested to see what he thinks of the play later then. He busies himself setting all the chairs out – and by 7.30pm, 70 or so folk are packed in. The heating is turned up, too much possibly, it feels VERY warm (so I guess I’ll be losing yet more weight tonight then), and I feel a few nerves – doing this play in this town. I feel a sense of responsibility towards Bert and his story and an awareness that there is still strong feeling in the town in some quarters against the COs who were stationed at the Castle – which, we are all aware, is situated just on the other side of the right-hand wall in the Town Hall.

But I don’t say anything.

After the Q and A is over, I ask Steve the caretaker what he made of it all.

I try very hard in the play to be fair to the military and their point of view – and to portray the stresses and strains they themselves are under. And during this whole week in North Yorks I am more conscious of the resonance of this play, this story, than anywhere else I’ve performed it. Opposite the Town Hall is the Green Howards Army Museum, and just down the road is Catterick garrison town, with thousands of soldiers and their families living there. We’ve been driving up and down Tank Road on our travels, and passing many a road-sign helpfully informing us that there are ‘TANKS TURNING’ (didn’t see any all week, though – but then it is February and the weather has been a bit nippy), or other signs saying ‘TANKS EMERGING’ – not till we’ve driven past, though, I hope! 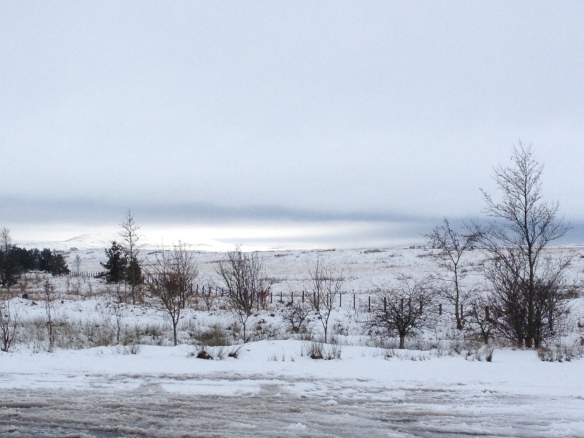 I can’t help remembering the woman on Tuesday who applauded the COs’ stance but said, Thank God we have soldiers to defend us. Around these parts she is clearly not alone …

So, Steve, I ask him, do you have any thoughts, questions about the play?
I do have one question.
What’s that then? I ask.
How do you learn all those lines?

Then he moves off to stack some chairs, and I go back to stacking my crates – wondering to myself what his real thoughts might have been behind that tight-lipped response.